Audio: “An Introduction to Law Therapy” talk given by me at the Open Forum in Chippendale in Sydney, 9.1.2019

On June 15th 2021 in the Federal Court I referred a gigantic pandemic sized secret invisible but jealously protected fraud, going since 1614, which I am the only person in Australia to have ever detected, to the Commonwealth Department of Public Prosecutions for a major prosecution. I am being prosecuted for having reported the secret fraud and for having subsequently been the victim of 177+ frauds by ASIC and CDPP operatives, whom they are representing and acting for.

Here are some documents for you to investigate:

77 sponsored frauds upon me by ASIC’s and the CDPP’s skilled operatives,

107 ‘fraudulent retention’ frauds upon me by 13 banks,

My 30 page initial defence and explanation to the Local Criminal Court where ASIC and the CDPP are prosecuting me for my being the victim of 177+ frauds by their operatives.

Come along and discuss these and other matters at my Dr David’s Friendship Dinners every Friday and Saturday nights in Sydney.

For details as to what’s on please go to: davidsdinners.org and ring or text me on 0419 605 365 to make enquiries and/or to advise of your intention to attend.

Invitation to my new e-book on Kindle. Please go to https://www.amazon.com.au/dp/B09SXVCSW8? to have a look. - Dr David

The Defendant has been caught allegedly paying the debts of others which are not his to pay.

The moneys were never spent.

Two in-evidence rates of interest have since been applied to my moneys, one after the other, from June 20th 1966, right up to the present day.

My moneys, to this day, still, have never been spent.

“To get rid of some of the moneys I admit that I have been paying other people’s debts which are not mine to pay”.

Defendant to buy other people’s debts first and then pay them!

Please have each debtor and witness provide an outstanding debt amount proof for my purchase of each debt. - sending again as I forgot to request confirmation of receipt

1) Please have each of your debtors and witnesses obtain, by means of sending the wording below, an amount in writing from their bank, or creditor, on a letterhead sheet of paper with the business card of the bank officer with whom they have communicated, signed and dated, to give or email to you for you to immediately email to me for me to purchase their creditor's debt with them and then for me to pay out my newly acquired debt, as sentenced.

The debtors and witnesses can simply email this wording below to their bank or creditor to obtain the buy/pay figure from their bank or creditor, which is to be provided to me no later than by 6pm tomorrow, Friday May 20th, if they are agreeable for me to purchase their creditor's debt, as sentenced, and then pay out my newly acquired debt with their former creditor or bank with my negotiable guarantored appreciating Court Order originating moneys, or if not say why.

After I buy and pay the creditors' debts, under my new 600% system, they should be hearing no more adversely from their former creditors. If they do I would like to know why and be advised.

I shall provide the list of subject moneys shortly.

I am also preparing a list of moneys that have allegedly been defrauded from me by operatives and agents acting for instructing principals as alleged evidence of the proceeds of crime which are all to also be promptly paid into the Court in their appreciated amounts as they are all evidence of the alleged proceeds of crime and have never been able to be spent or applied in any way, as to do so would be fraud.

I put you on notice that I have counted over 100 frauds practised upon me over the past five or so years, and am still counting, not to mention all those before that, that have been the subject of efforts to conceal but which have always been in clear evidence before you, at all material times and about which you have kept quiet.

This letter will be produced to the Court.

I have someone quite solvent, who, as a result of a very constructive four hour May 2021 consultation with ASIC, followed up by consequent instituted Court proceedings brought about by (a seeming different department of) ASIC in the Courts, he has, during the conduct of those lower court proceedings, been both properly found ‘guilty’ and quite properly sentenced by a higher Court, which found jurisdiction, to, under the accrual system of accounting, buy, along with (any)other people’s debts, my debt with you, with his ‘capital appreciating’, equitable entitlement guarantored funds, and then to, straightaway, go on to pay the debt, that has just become his. Curiously, despite the higher Court verdict of ‘guilty’ having been found and an appropriate, learned and judicious ‘purchase/pay ’sentence handed down, the CDPP is continuing to prosecute him after the above sentence has been handed down and he has accepted it and is underway with compliance.

Please advise by return email in writing within 36 hours, i.e. by Friday, tomorrow, at 6pm, of the price for him, within say 48 hours, to, under the accrual system of accounting, buy my debt and then pay out his debt as a result of the constructively arrived at, so called, ‘ASIC Innovation Initiative Incentive’.

If you do not provide a price then that shall bring about an automatic stay of my payment obligations, during which time no further interest will accrue until you provide a purchase/payout figure and any details. It may even annul the debt.

We advise that upon his purchasing of my debt and then his paying out his debt, my direct debit facility with you automatically concludes and no more direct debit deductions are to be taken. His very generous purchase of my debt and very generous consequent payout of his debt will give rise to some considerable change which is to be returned to him within, 28 + 7 days, lest there be default.

Invitation to my new e-book on Kindle. Please go to https://www.amazon.com.au/dp/B09SXVCSW8? to have a look. - Dr David

This may be of interest to anyone who has been convicted by a jury or adversely or financially, and tortiously, impacted or had a lot of their precious time wasted due to a jury in New South Wales since June 17th 2019 - or is wanting to get out of jury duty for good.

Precedent: Jury decisions have not been binding or lawful or enforceable in New South Wales since June 17th, 2019 !

In fact not only that but it is retrospective from that date backwards !

If you have been adversely affected by a jury decision since then or before or would like to know how to get out of jury duty please give me a call and I will email you a buried and now invidiously unearthed legal precedent that would not have seen the light of day if an attempt to take over my moneys had not come my way. The precedent was created by me on June 6th, 2019, and upheld by the 'Courts' on June 17th, 2019 but unexpectedly came to light due to the just mentioned approach to me.

You can now start pleading this.

Even apart from the precedent the argument stacks up on its own.

You are now invited to check out my new e-book on Kindle. Please go to https://www.amazon.com.au/dp/B09SXVCSW8? to have a look. - Dr David

My objection to performing jury duty on May 6th is a legal one.

The use of a jury denies a defendant to his or her right to knowing the grounds, precedents, case law and reasoning upon which the members of the jury made their decision.

A defendant is not provided with any reasoning or grounds for the decision and so cannot appeal upon the basis of any reasoning etc. given.

Hence, it is an unjust process which denies a defendant his or her entitlement to information as to why the jury made its decision and if it was even on legal grounds with reference to precedents, legislation, case law, evidence, testimony, statements or the like.

A defendant is entitled to a reasoned decision in writing to take to their cell for their edification and to assist them to formulate any appeal.

A jury system does not allow this and so is unjust and should be abolished and judges' decisions only be given. It is also very time consuming and inefficient.

One reason originally for the jury system was to protect a judge from reprisals and sheet any blame onto the unknown members of the jury. This needs to be rethought in the twenty first century.

Sorry about the delay in responding. I think I am one day late.

It is better that I did not attend as if I did the commencement of this interchange would not have arisen.

We have reviewed your explanation of why you failed to attend for jury duty. We have accepted your reason.

DISCLAIMER: This email and any attachments are intended only for the addressee named and may contain confidential and/or legal profession-privileged material. If you are not the intended recipient you must not use, disclose, copy or distribute this communication. If you have received the message in error, please delete the email and any copy and notify the sender by return email. Confidentiality or privilege are not waived or lost by reason of the mistaken delivery to you. Views expressed in the message are those of the individual sender and are not necessarily the views of the NSW Department of Justice.

If we accept that my reasons are valid then what should take place from hereon in in the interests of justice that many may enjoy their denied rights, past, present and future, NSW and interstate and international?

Please pass on my response to the relevant decision makers to further respond to me. I look forward to hearing from them.

Date of the Cause of Action Accident at Bressington Park, Homebush Bay: 9.05 am, 23rd August 1963

2UE Top 40 chart that came out that morning. 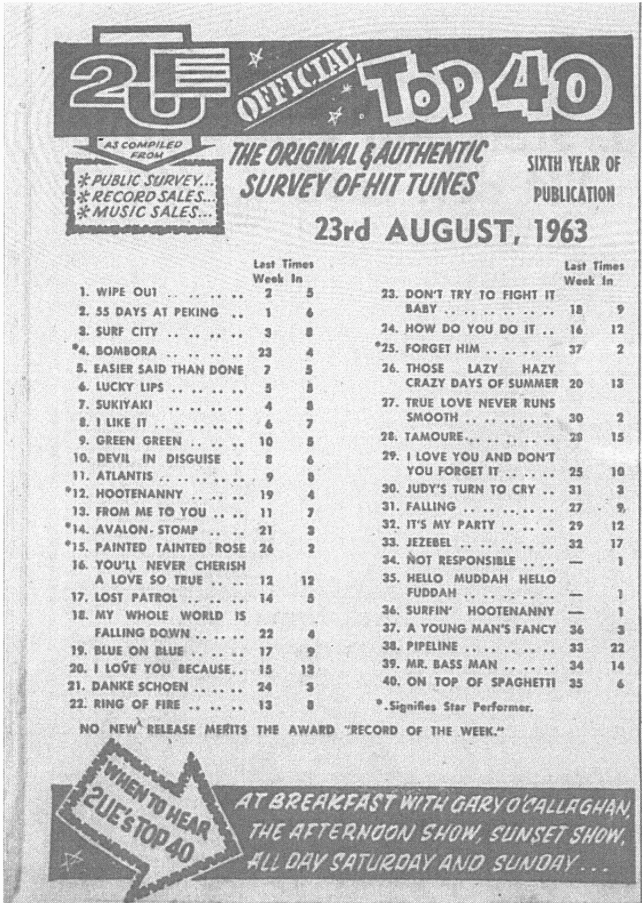 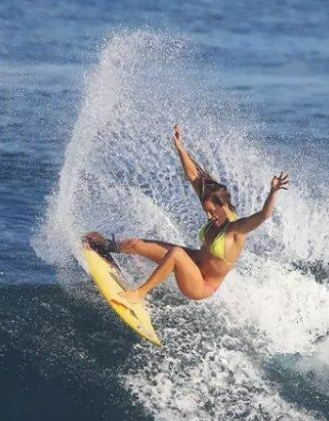 Some amazing signs, divine portents and proofs to ponder in our Murf the Surf Wipeout murfari surfari.

Please click on the links to hear the music.

Wipeout Tune on Youtube. At the beginning you will hear what sounds like the ground cracking under me as I fell in the subterranean fire that morning at 9.05 am.

Wipeout, by the Surfaris, hit number 1 on the 2UE Top 40 on the very morning of the accident (23.8.63) at Bressington Park, Homebush Bay, showing that a many faceted Wipeout facility would eventually develop from my personal wipeout, at age 9, that morning.

#4: “Bombora”, by the Atlantics – a long slow running wave which can't be seen from the surface as it goes by but which swamps the beach when it breaks.

#13: “From Me To You”, The first Beatles song to ever hit the 2UE Top 40 announcing how the money travels from me to you when we do a ‘Debt Wipeout’.

#34 The highest newcomer in the chart, at the number of the house in which I grew up, No 34, announced that I was “Not Responsible”, by Helen Shapiro, not at fault.

Two other notable songs are #18 “My Whole World is Falling Down” by Brenda Lee and #31 “Falling” by Roy Orbison.